We focus on the “price” of security

Point & Figure Charting is conducted along technical lines, adhering to the relationship between supply and demand. Simply stated, we focus on the “price” of a security, because it is the ultimate determinant of supply and demand in the marketplace. When you cut through all the red tape on Wall Street and Bay Street, what moves equity prices is supply and demand. It is Economics 101. We don’t buy bathing suits in the middle of winter or fur coats in the middle of summer. The same forces that move prices in the department store or the supermarket move the stock market. When all is said and done, if there are more buyers than sellers, then  price will go up and if there are more sellers than buyers then price will go down. Analyzing the price action of a security can yield important information as to who is winning the battle for that security- supply or demand.

The Point & Figure methodology has been around for over 100 years. One of the first proponents of the methodology was Charles Dow, the first editor of The Wall Street Journal. Charles Dow was a fundamentalist at heart, yet he understood the importance of the supply and demand relationship in any stock. The Point & Figure methodology is still valuable today because it as a logical, organized way of recording the forces of supply and demand. We have reached out to the assistance of Dorsey, Wright & Associates who has taken this time-tested approach and given it new life by applying technology. Relative Strength — analyzing the performance of investment options against one another — is a valuable offshoot of Point & Figure.

Our philosophy, the combination of fundamental analysis with technical analysis, can help stack the odds in your favor. It’s like a musician playing the piano. Restrict him to playing the piano with one hand the music he makes is going to be marginal at best. Let him play the piano with both hands, fundamentals and technicals, and he will make beautiful music. Fundamentals can help answer the question of WHAT to buy and technicals answer the question of WHEN to buy.

We use our primary market indicators to get a measure of overall risk. With the assistance of Dorsey Wright, we  use technical market indicators that have been in existence for over forty years to ascertain the overall risk in the market -- to determine whether offense or defense is dictated. We then analyze our broad industry sectors to determine which sector or sectors have good field position. Industry sectors can move in and out of season just like produce in the supermarket. We then select individual stocks that have positive relative strength and have a good probability of outperforming the market. In other words, demand is in control.

Why Point and Figure Charts

The basic point and figure chart shows a column of X's which means the stock or index is rising. A column of O's means the stock is falling. Columns of X's and O's alternate back and forth -- they never appear in the same column. For the first action taken in a month, a number or letter is used to designate that particular month. This is how we show the time on the chart.

Given the price of security XYZ, determine the box value and write the appropriate range of prices in the left margin of the point and figure grid. Start the chart with the number (or letter) corresponding to the present month and place it in the box with the value equal to the previous day’s closing price. Depending on whether the stock price rises or falls during the day, add Xs or Os as required. If the price does not rise or fall the value of one or more boxes, make no chart entry.

Reference to time is made by entering the first action of each month with that month’s number in the grid. For example the first X or O in May would be replaced with a "5". The months October through December are noted by A, B, and C, respectively. It is also useful to write the year below the column in which there is an entry for January of that year.

Here are two examples of how a chart develops. 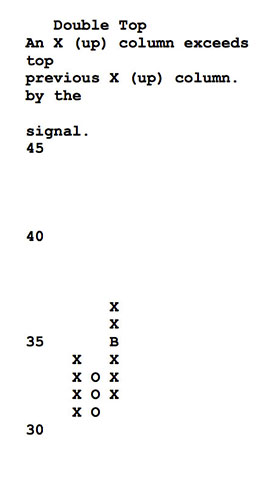 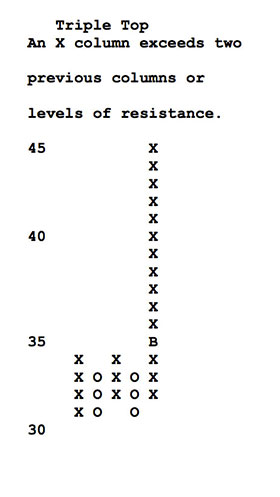 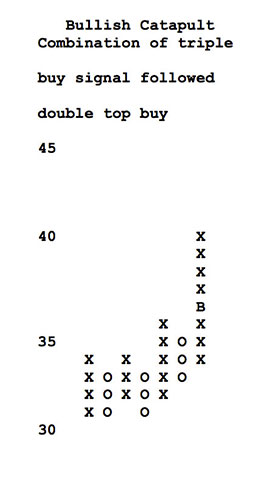 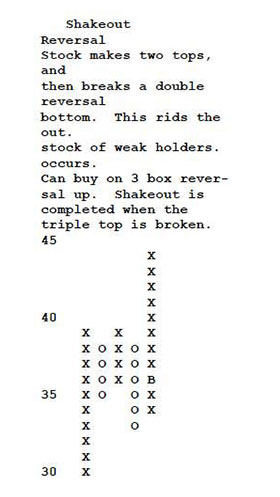 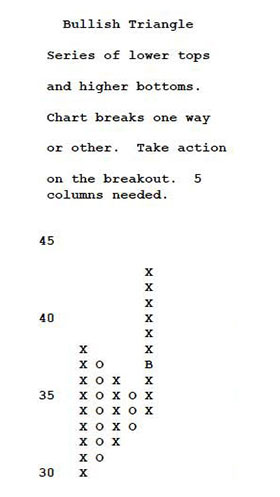 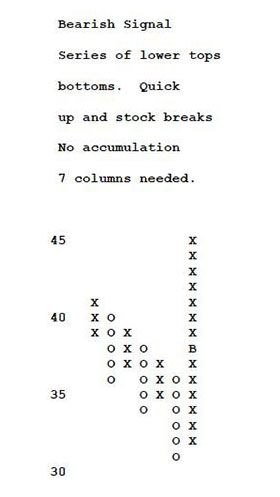 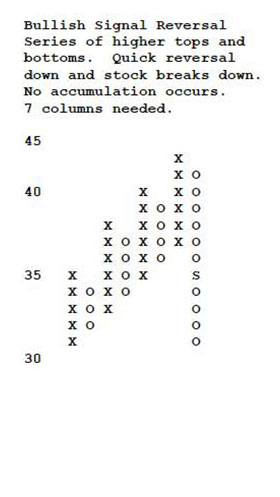 Using trendlines helps us to make buy/sell decisions. When a trendline is broken, it signals a change in the posture of the stock. The two major trendlines: the bullish support line, and the bearish resistance line, can be used to identify areas of support and resistance in point and figure charts.


Say for instance XYZ was at $80 and the Dow was at 2,500. If we divided $80 by 2500 and moved the decimal we would get 32. This number 32 can be plotted just as if it was an $32 stock. Let's say the following week the stock falls to $72 and the Dow dropped to 2000. We now divide $72 by 2000 and get 36. In this case the stock dropped, the Dow dropped but the relative strength chart went up. This tells us that the stock is doing better than the Dow and it is possible that the only reason it is down is that the overall market is down. This stock could be one of the first to snap back when the overall market is ready. Remember according to a University of Chicago Study 75-80% of the risk in a stock is market risk, 20-25% is stock specific risk.

Relative Strength readings are taken daily and plotted on a Point & Figure chart. There three types of relative strength (2 for stocks, one for sectors). A stock can be measured on a relative basis versus the overall market and versus its peer group (other stocks within the same sector). Sector relative strength is a measure of that sector's strength versus the S&P 500.

There are 4 Combinations of Relative Strength.

With the assistance of Dorsey, Wright & Associates we use, measures of momentum and overbought/oversold readings to aid in our interpretation of a stock or an index. The measures are computed by their database, and can be accessed by clients. 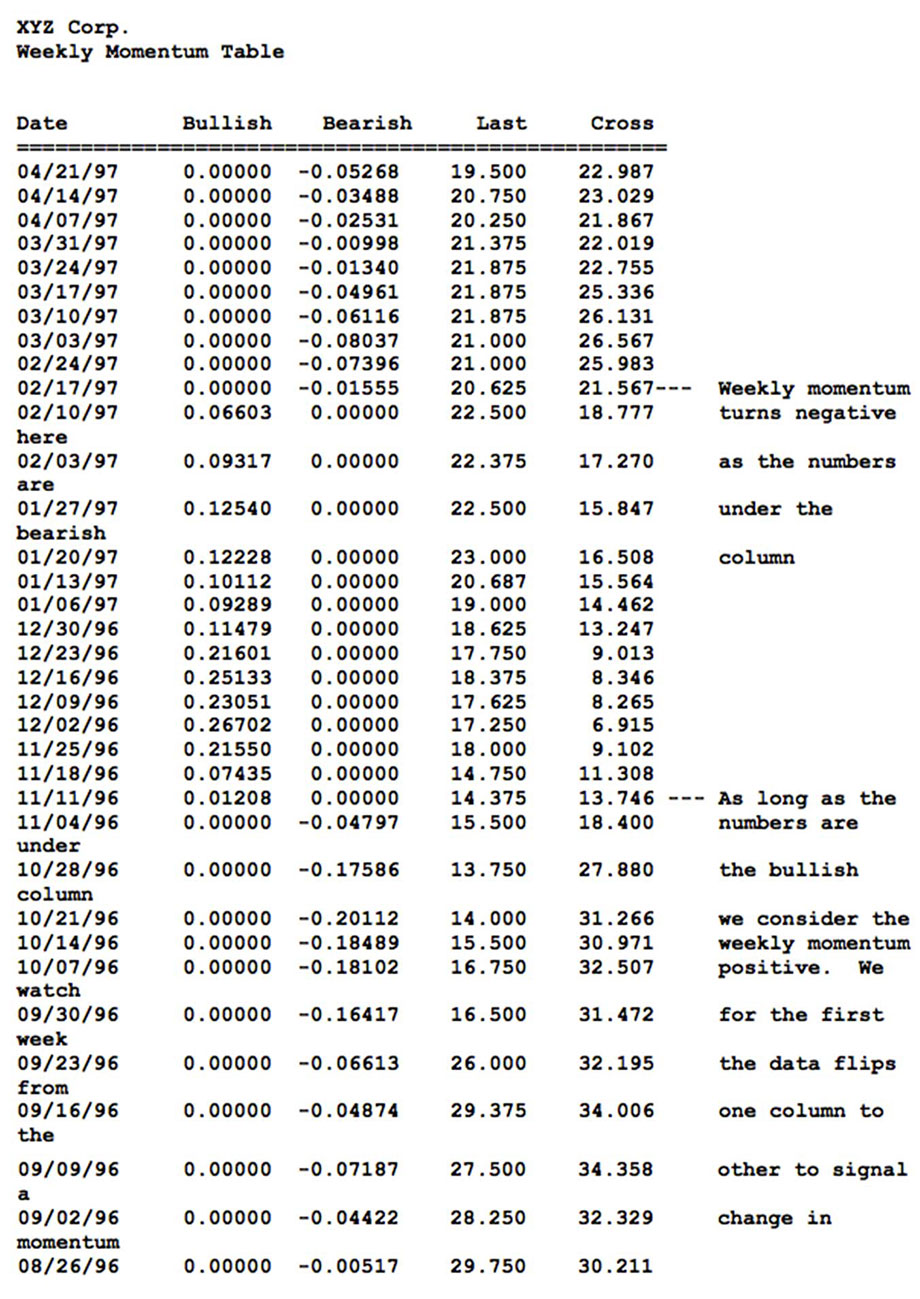 This is our major market indicator which tells us whether to be on the offense or defense. It is calculated by dividing the number of NYSE stocks trading on point and figure buy signals by the total listed on the Exchange. The percent of stocks on buy signals in is then plotted on a grid from 0% to 100%, where each box equals 2%. Levels above 70% are generally considered overbought, and below 30% are considered oversold. The best buy signals come when the NYSE Bullish Percent goes below 30% and then reverses up (must reverse 6%). The best sell signals come when the indicator moves above 70% and then reverses below 70%. There are six degrees of risk associated with this indicator but the most important concept to keep in mind is field position and what team is on the field. When the NYSE Bullish Percent is in X's, the offensive team is on the field and wealth accumulation strategies are the focus. Conversely, when the NYSE Bullish Percent is in O's, the defensive team is on the field and wealth preservation strategies are the focus.

The exact same methodology that applies to the NYSE can also be applied to any stock index in the world including the Toronto Stock Exchange.

Using the same concept as the NYSE Bullish Percent, we keep bullish percent charts of each of 41 industry groups and the Dow Jones Broad Sectors. The percent of stocks on buy signals in each sector is plotted on a grid from 0% to 100%. As with the NYSE bullish percent, the best buy signals come when a sector goes below 30% and then reverses up. The best sell signals come when a sector goes above 70% and then reverses below 70%. The same six signals (or risk levels) apply.

This is the second step of the game plan - determining what sectors have the offensive team on the field. The ideal situation for a sector is as follows:

There are several different charts we use to evaluated the fix income market. They include the following, the DWA Bond Average

The DWA Bond Average used to be the Dow Jones 20 Bond Average until they discontinued it in April 2002. We have updated the index and are

maintaining the average under the symbol DWBOND. This index is comprised of 20 long term bonds. This chart remains our primary bond indicator. The signals given are typically long term and in the past have been very accurate. This average is plotted on a point and figure chart with a box size of .20. The average moves slow and does not often give signals, but when they occur, we pay attention. A sell signal, which is given when a column of Os exceeds a previous column of Os, suggests that rates are about to rise. The opposite holds for buy signals.

The Dow Jones Corporate Bond Index (DJCORP) incorporates a total of 96 investment grade, non-callable bonds across the maturity spectrum. As well, it draws issues from the Industrial, Financial and Utility/Telecom sectors. The primary differences between this index and the DWBOND are the equal representations between the sectors and maturities. The DWA 20 Bond index is comprised mostly of long-term bonds and would not benefit from strength seen in shorter maturities or a steepening yield curve. For example, if the yield curve were to steepen in a way that yields on the 10 yr.+ issues rose but 5 to2 yr remained constant the DWBOND index would underperform because the maturities of its components are mostly long term. By evaluating the .25 point charts of the 5yr (FVX), 10yr (TNX) and 30 yr (TYX) yield indices we can get an indication of the how the different maturities are likely to move.

There is a lot of information and it’s all technical in nature. We are trying to establish what security or group of securities is dominating the market. We divide the market in 6 asset classes and use Dynamic Asset Allocation to determine the leaders from – US Equity, International Equity, Fixed Income or Bonds, Currency, Commodities or Cash. From here we can drill down and either increase our equity exposure or increase our cash exposure if warranted to protect our portfolio from the ultimate gyrations that occur in the market over time.